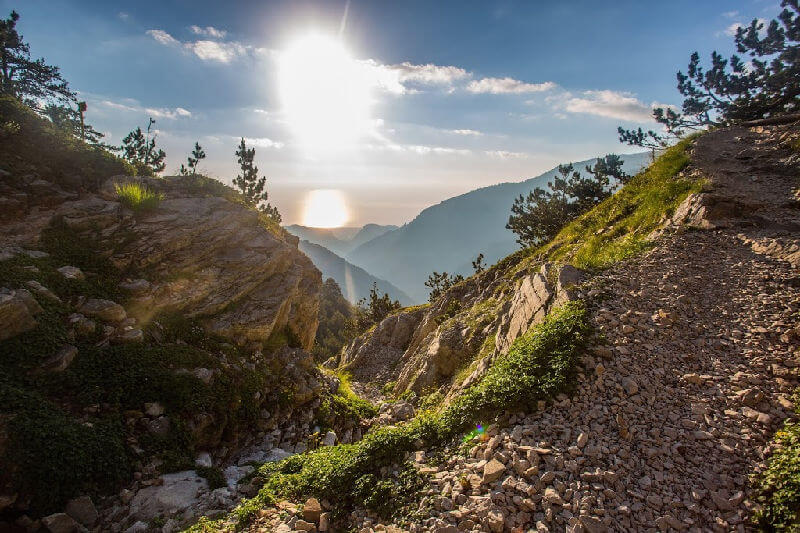 Beltane welcomes the season of the ☼ big sun ☼ here in Scotland and together with Samhain – its opposite in the seasonal wheel of the year – marks one of the two most significant junctures in the annual solar cycle.

As a cross-quarter day, Beltane occurs at the mid-way point between spring equinox and the summer solstice and carries with it a verdant, vigorous and vivacious energy : this energy is extremely potent and most definitely directed upwards, with fresh vegetation bursting from every cleft and crevice.

Procreation is the name of the game – for both flora and fauna.

It’s a time for celebration, yes, but also supplication, sacrifice and alongside the revelry, even purification. All aspects of life conjoined in riotous union!

The Ancestors knew something of it, for this marker is explicit in the alignments of their lithic monuments and in the continuity of their wisdom onwards through the naming of places, and associated folklore and traditions.

A major fire ceremony, Beltane saw folk gather atop the beacon hills called Paps, so named for being shaped like the female breast. Said to be created by the all-powerful Cailleach, Paps were the site of ritual bonfires across the land – pre-Christian traditions that survived well into the modern era and versions of which are being resurrected once more. 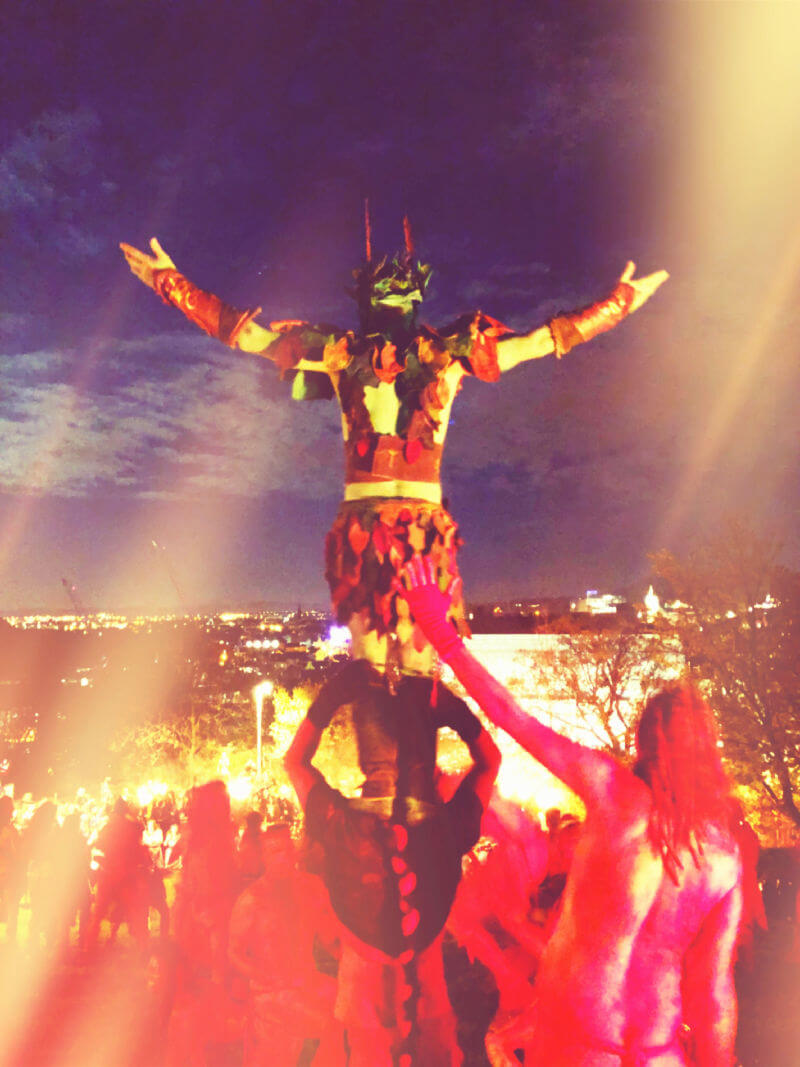 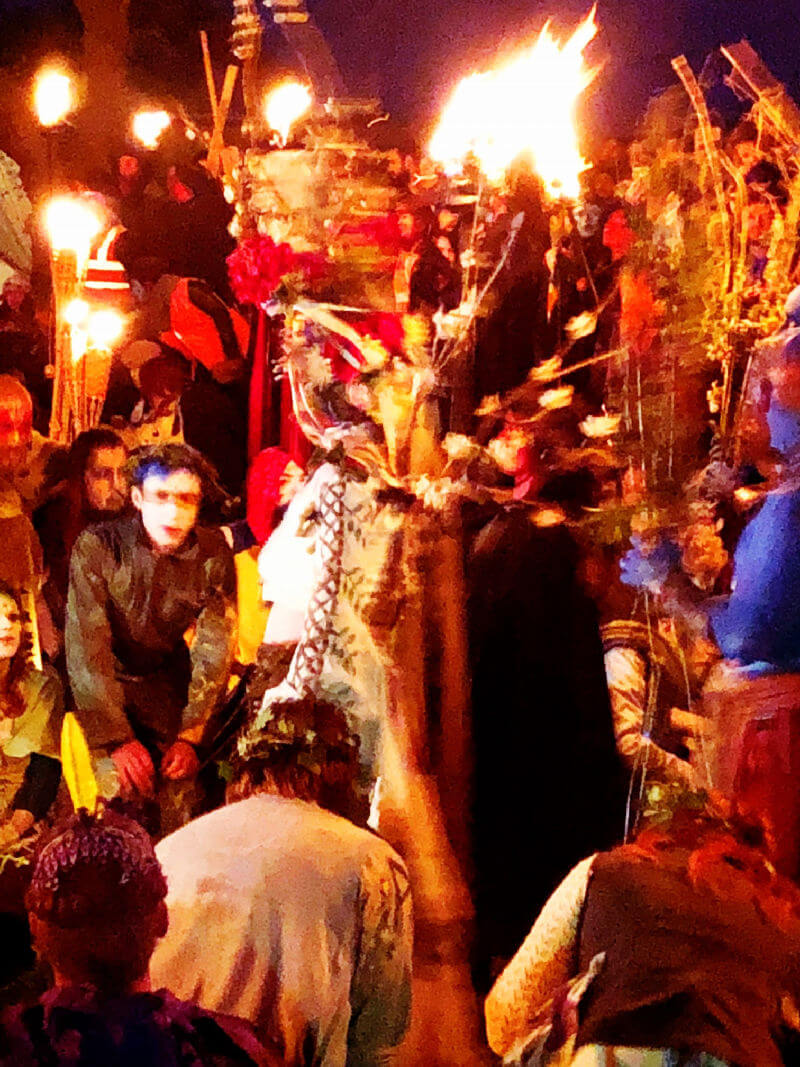 At Beltane, the return of the sun and the growing season that resulted from its warmth was worth celebrating. The sun has always been central to life – a very practical necessity.

In reverence to this life-force, it’s likely that an exchange was made in the form of human sacrifice, transforming over time to less controversial votive offerings. Human sacrifice – the ultimate supplication : perhaps less a demonstration of ‘barbarity’, but instead a recognition, from their perspective, of the seriousness of what’s at stake?

Historically, the sun was offered deific status not just in Scotland but across the world. I’m reminded of Dr Carl Jung’s writings[1] on his meeting with Ochiway Biano [Mountain Lake], a member of one of the Pueblo Indian groups of New Mexico. It seems so timely to turn to these words with the current state of our world, as I continue to explore the annihilation of folk culture here in Scotland:

“Why,” Mountain Lake said, “do the Americans not let us alone? Why do they want to forbid our dances? Why do they make difficulties when we want to take our young people from school in order to lead them to the kiva (site of the rituals), and instruct them in our religion? We do nothing to harm the Americans!” After a prolonged silence he continued, “The Americans want to stamp out our religion. Why can they not let us alone? What we do, we do not only for ourselves but for the Americans also. Yes, we do it for the whole world. Everyone benefits by it.”

I could observe from his excitement that he was alluding to some extremely important element of his religion. I therefore asked him: “You think, then, that what you do in your religion benefits the whole world?” He replied with great animation, “Of course. If we did not do it, what would become of the world?” And with a significant gesture he pointed to the sun.

I felt that we were approaching extremely delicate ground here, verging on the mysteries of the tribe. “After all,” he said, “we are the sons of the Father Sun, and with our religion we daily help our father to go across the sky. We do this not only for ourselves, but for the whole world. If we were to cease practising our religion, in ten years, the sun would no longer rise. Then it would be night for ever.” 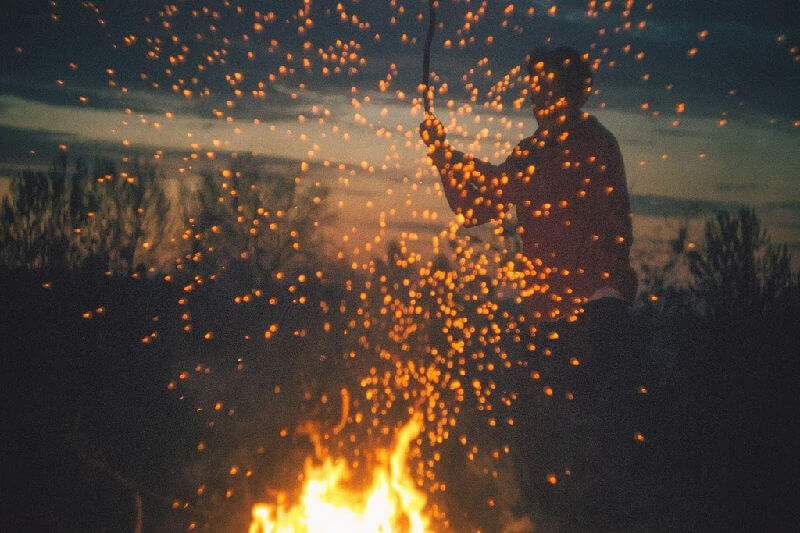 The significance of losing indigenous practices (not by means of natural evolution, but the willful destruction of them) cannot be under-estimated. The effects are far and wide-reaching, for both the individual and the world.

As the First Minister of Scotland finally declares a climate emergency (I suspect in response to the positive reception shown towards Extinction Rebellion and Greta Thunberg) many are left wondering if we are in fact not already experiencing the perpetual night foretold by Ochiway Biano.

But it is during these most pressing times that our celebration of life and its mysterious ways really counts. Joy and pleasure is a prerequisite for being human.

That’s where these ancient traditions really do us a massive favour – they provide an opportunity for us to enter into relationship with human fundamentals and set aside our bias towards Logos, in favour of Eros.

Beltane is a time to get it on. To open up and to make merry. To face our mortality by means of exaltation, especially for the activator of life – the Big Sun! 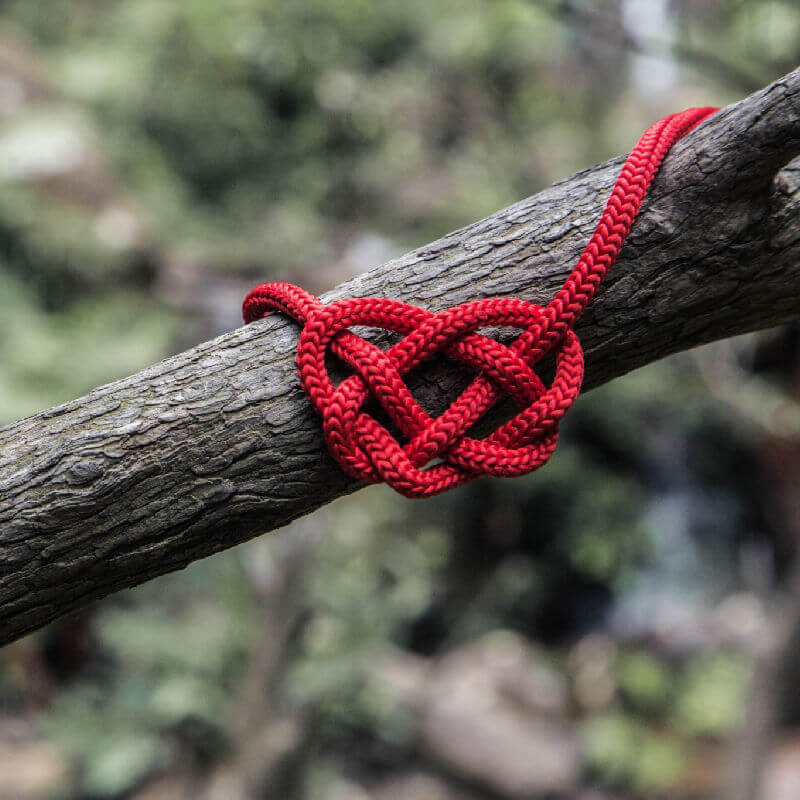 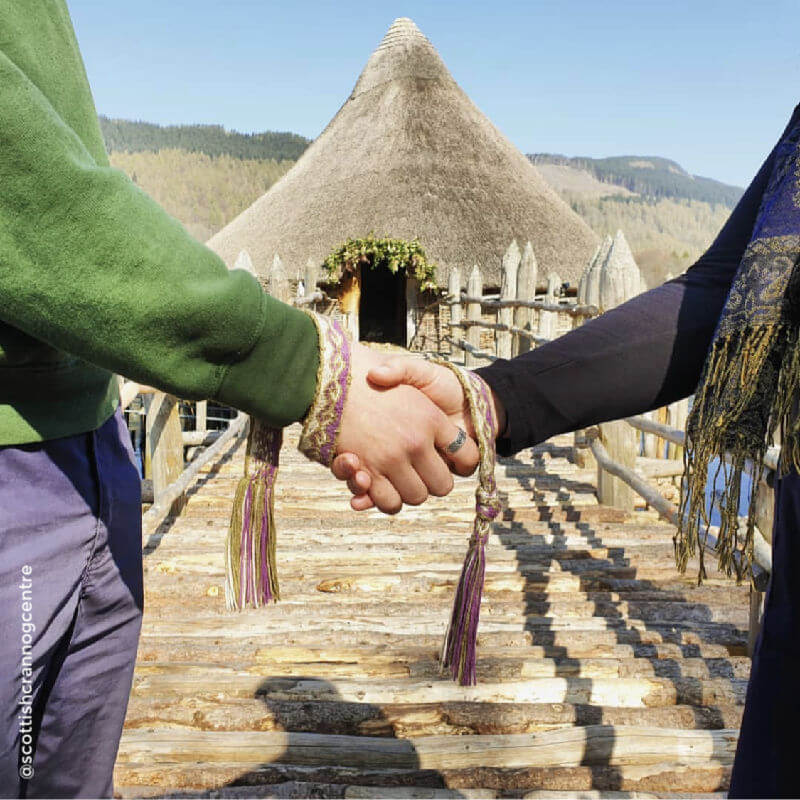 Not nearly as Dionysian as last year’s Beltane Fire Festival atop Calton Hill, I’ll nevertheless be celebrating Beltane, with a union of sorts – a handfasting ceremony and renewal of vows with Martin, happening at The Crannog Centre on Loch Tay. Commitment is something of a theme at each of the eight festival days and this springtime celebration has long been popular for pairing off (whether ‘legitimately’ or not so!)

The deeply affecting mythological Perthshire landscape, is full of the presence of the Cailleach and evidence of long-standing Scottish tradition. The impact of spending time here during our visit last May is indelible and I’m excited to once again visit the experimental archaeologists at The Crannog. (Wait – was human sacrifice still happening in the Iron Age?) 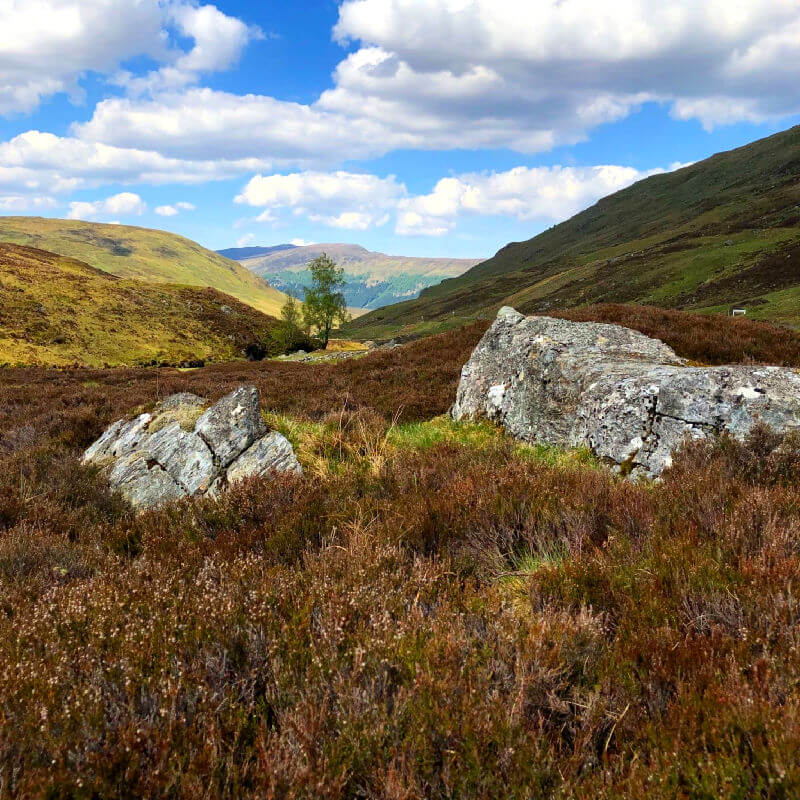 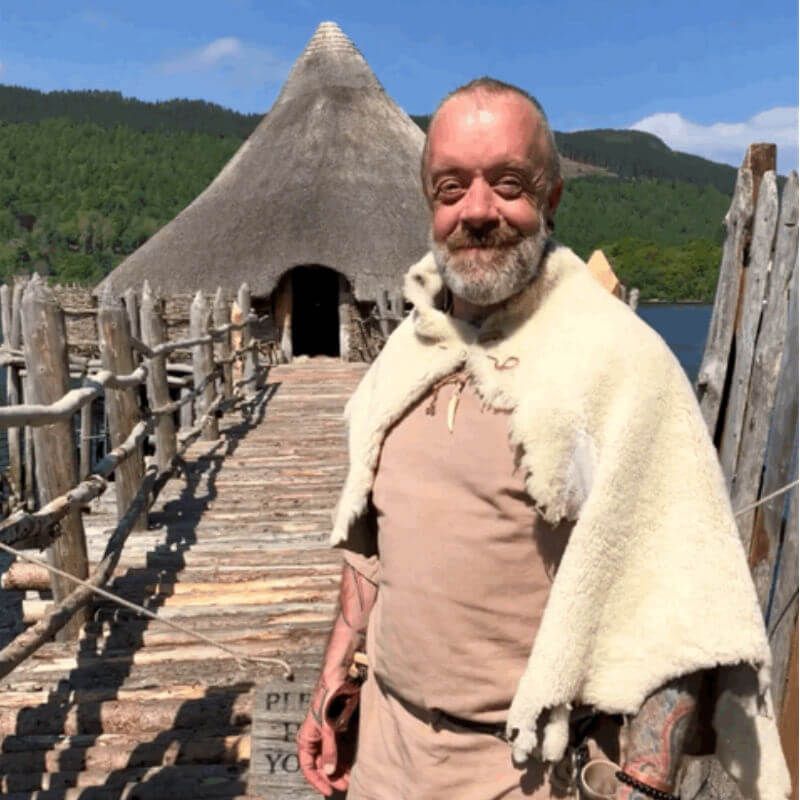 These junctures in the solar cycle are always massively significant for me. This Spring Equinox, I experienced a meltdown of sorts during ceremony and it led me to take action in the following days and create my Patreon page – something I’d been thinking about for a gey[2] long time.

In the lead up to Beltane, I’ve also been struggling, entirely overwhelmed and full of all kinds of self-doubt – but it feels like I’m passing through that moment and able to identify it clearly as an experience of my creative process.

Can you see that where you may be struggling right now could be part of your creative process? Are you able to observe yourself in that experience and identify its root cause?

How might you celebrate, even in the face of any struggles or adversity you may be experiencing? What sacrifices might you be prepared to offer in recognition of the glorious miracle that is your life, no matter the current manifestation of it?

And, perhaps most importantly, where may you be able to invite Eros into play and allow room for joy and pleasure in your creative experience?

Not always easy to find answers to these questions, I know… especially when you’re experiencing meltdown.

As for Beltane, I feel there’s so very much more I could explore and share with you here, but I shall save it for another platform at another time.

May your Beltane Fires burn riotously!

Sign up to be informed of new offerings in the form of art, workshops + events.
Fresh, new content coming soon.

Add yourself to the news-love-letter list to hear about the all new content coming to you soon.
Includes the Solar Circular - an update on each of the significant markers throughout the Scottish solar year.