I wrote this on the beach for you (and me) 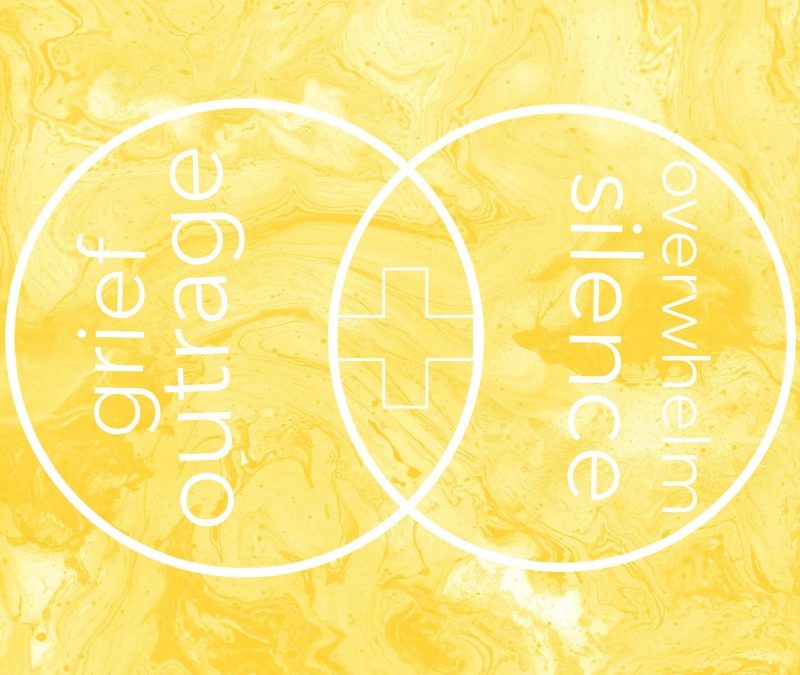 Today I am sitting at the beach. The sun is shining brightly in an almost cloudless blue sky, the sea breeze is keeping us cool and the tide is heading out, pulling the water back towards the Isle of Arran, a long body of land in shadow front of us.

Some kids are competing to cover themselves in as much sand as possible. Other kids are running full pelt into the freezing water. There is laughter, screaming, shouting, conspiratorial whispering.

Out in the sea there’s a dad being too annoying for his kids, in that passive aggressive way that Scottish dads often are.

There’s been some kite flying, too – some more successful than others. I’m loving the multi-generational camps, with all the gear (including that much-needed wind-break we’ve promised we’ll invest in some time for ourselves.)

I’m at the sea, and I’m mightily troubled. In fact, my grief is paramount. Grief at where we’ve gotten to in the world. It’s been this way for some time and I never talk about it here, or anywhere online. I remain silent here because I just don’t know what to say.

Stephen Jenkinson talks about “being troubled aloud in troubled times” and maybe this is where I’m at. If I’m to be a proper elder and a good ancestor, I must vocalise some of my troubles and share them. It seems, anyway, that he has encouraged me to do so.

But, oh, it all seems so vast : the troubles are so very troublesome. I’m troubled and outraged, actually. Where do I start?

I woke early on Tuesday, processing the news from the day before about the racially-motivated, brutal murder of teenager Nia Wilson in America. She isn’t the first and sadly, shockingly, she won’t be the last – but I couldn’t get her and her family and the whole fuckery of it all out of my head.

On Instagram, where I read the news, there was also a playing out of power, bullying and internet hijinks that in my take on the matter demonstrated white supremacy in action. Not the conscious kind displayed by the Klan and the tikki torch wielding neo-Nazis, but from a self-proclaimed white ally and the systems that support this behaviour.

The turmoil of it all is coursing through my body. I can’t actually hold it in any longer.

We need to call the systems we’re propping up to proper account. We also need to sit in the grief of the fuckery of it all, not drink or drug it away. Neither can we spiritualise it away. If we could CBD it NLP it away, it’d be done already, right?

So many prayers, so much positive psychology!  And still, this mess!

We need to look to the world we’re part of and these very troubled times. We need to break the silence, shift out of our overwhelm and face the trouble. It doesn’t actually require an instant solution from us. How could there be one? The first step, as I and others see it, is to admit it is so.

There is inequity here in Scotland, that’s for sure. There is major fuckery going on around us all the time. And today, I can trace all the threads of all of those injustices coursing through the tapestry that is my life in this place and time, but this is not the place to lay them bare.

Anyway, it’s all okay – David Attenborough has spoken and Starbucks have banned straws and we can all stand down!

Well, here’s the deal. I’ve stood down for too long. I’ve been outraged and overwhelmed into silence for too long. I’m not the first to speak up. I remember when Rachael Rice started a series aimed at waking up white spiritual women – I didn’t read or watch any of it at first. I’d disassociated myself from ‘those’ white spiritual women some time ago.

I never really got into that whole scene properly anyhoo. But here’s the deal – I had all the appearance of such, what with my leanings towards crystals and meditation, plant medicine and adventures into ‘awakening.’

Truthfully, I didn’t for a minute think Rachael may have been talking about me! No surprises that she was. I was just late to the party…

Okay, so I have been making many internal shifts, these last years, always fuelled by my inner disquiet with my personal life and the state of things outside.

Last year, I finally managed to switch up my teaching offerings away from the old language of self growth and the paradigm of teacher-show-and-tell to something that makes way less money, but comes somewhat closer to who I am, what I believe and how I believe we can all operate in the world. I don’t think it’s as popular as show-and-tell was, though, so we’ll just have to wait and see how that unfolds….

Even so, I’ve remained so silent I’ve stopped sending emails to the folks who joined my newsletter list, stopped posting on my blog, and have been operating Facebook and Instagram light for ages now.

This year, I’ve been focussed on finding out what it takes to be alive in these times and how it is to be an artist in these times. It’s brought me to my knees, more often than not.

I’ve been in so much pain at times from a twisted pelvis that I couldn’t walk unsupported. I’ve written whole versions of myself into thought form, and let them drift away as the next tide of grief and overwhelm creeps in, unexpectedly and from the sidelines.

That point in the middle of the vesica piscis above, though – the vulvic opening into wisdom, called the mandorla – that’s where the art is made. Our art is created from the tension and conflict of opposites we hide so shamefully in our quest to just get on with things and live up to the idea of who we are in the world, who we want to be and who we are yet to become.

Right now, I don’t have any answers. But I know I can’t be silent anymore. I know there’s too much coursing through my mind and body about all that is wrong in my world – and yours – to contain it all here in this space. Like I said, the fuckery of it all is too vast to lasso into submission.

Today, I won’t be overwhelmed into silence. At the same time, this may be the only outburst for months as I retreat back inwards to tend the grief and the rage. I don’t know.

But maybe, just maybe, I can be troubled aloud in these troubled times. As Stephen Jenkinson said whilst promoting his latest book, “these are not the times for okay people being okay.”

All I have is my offering here to say, I see all the fuckery and I sit here with you in it. It’s where my latest art emerges from. It seems small, perfectly inadequate – and yet – it’s all I have for now.

It’s early evening now and there’s only a few stragglers left on the beach. It’s still summer, though, so the sun is high and there are more hours to while away until nightfall. The wind is fairly whipping up and Martin just had to chase our sun umbrella across the sand. Probably time to leave and go foraging for some food. Plant-based, cos I’m white, privileged and doing my bit, you know…

All the while, I’m still thinking about the brutal murder of an eighteen year old woman called Nia Wilson, who had the wrong colour skin.