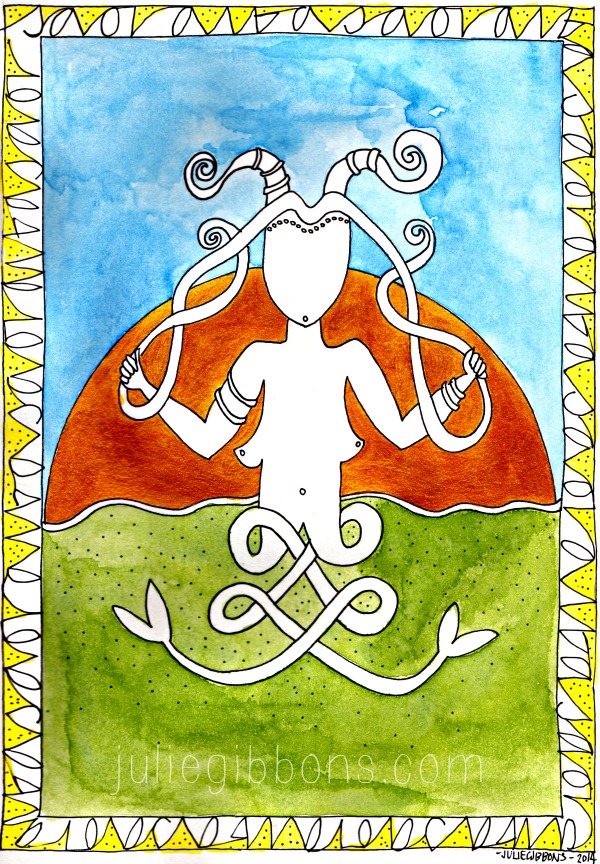 That night – A Night for Scotland – was one of the best moments of 2014 so far – three thousand folk gathered in Edinburgh’s Usher Hall to see performances from leading performers, including Eddi Reader, Stanley Odd, Franz Ferdinand and Mogwai.

The audience and the performers were all there to support a Yes vote in the forthcoming independence referendum. Me and my wee family are somewhere in that photo, on the top section, on the right hand side – full of hope and excitedly cheering and waving our flags.

It’s now been eleven days since the people of my homeland voted to decide whether Scotland should become an independent country – and I’m still recovering from the impact of the result, which was declared as 45% YES and 55% NO.

As a committed independence voter since I was first allowed to wield the wee wax pencil in the election booth, and as an engaged campaigner for this 2014 referendum, this result was a crushing disappointment like no other I’ve felt before.

For now, Scotland remains part of Great Britain and that’s something I and the other 45% of YES voters are trying to come to terms with.

Truth is, the last time I was as politically active was when, as a young student, I joined with my fellow members of SCRAM (Scottish Campaign to Resist the Atomic Menace) to join hands across Scotland in our bid to halt the Torness nuclear power station being opened. We failed in that gallant effort, as well…

And this is what leads me to consider what effect it has on the psyche, to believe with every fibre of your being that you’re one of the good guys, but to know that most of your beliefs are not shared with the majority.

From sovereignty of country to Self

SCRAM had nowhere near the support of the YES movement, of course. The YES movement was hard to pin down. It was horizontal by nature and large enough to comprise many different factions, (I was particularly impressed by National Collective, Common Weal, Women for Independence) each with particular concerns, but sharing the same event based goal of achieving a YES vote in the question of sovereignty for Scotland and its people.

The 2014 referendum results has given many of us pause for some self-reflection, in addition to the obvious outward concerns of the state of the country and the questions of where do we go from here?

There’s been a tidal wave of enthusiasm to join the SNP, the political party that is currently in a majority in the Scottish Parliament and who are in favour of an independent Scotland – and to a lesser extent the other pro-Indy parties, the Scottish Greens and the SSP.

I’m not a fan of top-down party politics and although I can clearly see a sharing of outlook with the Scottish Greens, it just doesn’t feel like the right thing for me to do.

As someone who sits on the introverted scale, with a high score for the feeling and sensing functions, the first port of call for me when I’m making any decisions is to turn inwards and see how I’m feeling about it. The secondary check is to see if my body holds any clues.

It’s not that I completely discount logical reasoning, of course, but the truth is that often I can research a subject in depth and still, I don’t know what the best answer is for me.

Checking in with my inner Being, I continue to feel that joining a political party is not the right move for me. There are many thoughts, reasons, feelings and sensations surrounding this decision.

And it doesn’t mean that I’ve given up on the campaign! I created the image above as a reminder of my belief in and vision for an independent Scotland. It’s based on the Pictish Merman of Meigle and I transformed that image into the feminine form and used my creative license to add some extras.

The text on the outside border reads Saor Alba and is the Scots Gaelic for Free Scotland!

Infusing an artwork with magic can happen by a number of means, but for me, using the symbology of the ancient folk and adding in some of the historical language of the land is one of the ways to do it. (Although, I’m taking a few liberties here, as Scots Gaelic was not spoken by the Picts – they most likely used an ancient Celtic language, with more similarities to Welsh.)

Translating our beliefs, values, hopes, dreams, goals and intentions into an art piece can certainly be used to contain and focus that energy into something more tangible than a thought, and something more creative (and definitely more Yin) than a list.

I also uploaded the image to my Red Bubble store to be able to share it (in loads of formats) with those others who share my hopes and passions for an independent nation!

I’m dedicating this piece to all of those involved in the YES movement, and contributing it to the collective unconscious, in the hopes that a slight shift in energies can help us get one step closer to our goal.

Authentic living in all things

But you lost the vote, many folk are thinking. Why can’t you just let it be? I’ll tell you why…

Because I believe that an independent Scotland will serve all of us to best effect.

I’m big on authenticity and living in accordance to your values. That’s why I created our family’s organic manifesto back in 2006. That declaration makes me smile a lot – I can see so much of it remains core to our way of life, and those small areas I’d need to concede we’re not quite living up to anymore. I can also see where we’ve developed and moved on.

This referendum and trying to decide where we go from here has definitely made me think about revisiting our manifesto. And taking action according to those items which have come to light since we began to campaign for YES!

External actions so far include cancelling our BBC television license, not only because of the proven institutional bias against independence, but because we don’t actually believe in that model of broadcasting and certainly don’t like it when we find ourselves hooked into any of those television programmes they pipe down the tubes to keep us all anaesthetised against what’s going on around us.

(To be clear, if you watch live television on any channel in the UK, then it is a legal requirement to pay the BBC TV License.)

I’ve also set up a monthly donation to support  Common Weal as an alternative to the traditional political party movement: As for what else – well as an introverted HSP (highly sensitive person) who actively campaigned for YES, attending events, rallies and marches; organising and hosting events; leafleting; manning polling stations and endlessly talking to (and arguing with) many different people, I’m pretty much spent.

I think I’ve just about got over from the shock of the result, but I’m certainly not over the emotional and physical impact of the campaigning efforts, nor the aftermath – so for now, I’m trying to make sure that I’m living according to my values whilst keeping an eye on things out there in the world (and reading quietly about the type of Scotland I want to see emerge in the future.)

Thanks to everyone who supported me and took an interest in this momentous event. It’s probably been one of the most significant in my life so far.