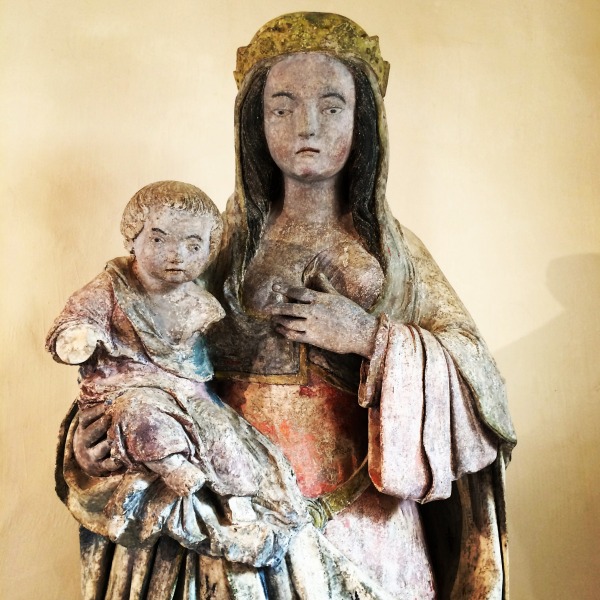 Part of our summer road trip house swap was spent with friends in the Burgundy countryside, where we stayed in an amazing stonemason’s cottage.

The weather was pretty grotty for a French summer – fairly chilly and very wet. But the owners of the guest house had left a guidebook with information on local attractions, and one of the entries caught my eye immediately – the medieval hilltop village of Flavigny-sur-Ozerain.

If we had a penny for every French medieval village we’ve visited … well, we’d have a fair few bob to spend on some Burgundy wine and Dijon mustard!

But this village held an added attraction – not only is it where they manufacture the famous Anis de l’Abbaye de Flavigny sweeties (those wee candies with the genuine aniseed inside) but it is where they filmed the movie Chocolat!

Definitely worth a trip in the thunder and lightning storm, I thought 🙂 And you know what? This wee village didn’t disappoint…

I was hugely captivated by this statue which had once rested in an outside alcove and had been restored and brought inside. The information text explained that although clearly a Christian statue of the Madonna, it is in the Flemish style (you can tell this because the Child is in her right arm, apparently) and is a Christianised version of the mother goddess Demeter. The village is labelled one of France’s most beautiful, and this resident had obviously had enough of tourists gawping in the windows – this window was made entirely from reflective glass : perfect for selfies! Something amazing to see pretty much every few feet, including when you look up to the second or third floor of the buildings and catch a glimpse of some pretty intense window art. There’s a fully restored town house to investigate, with some pretty interesting archaeological finds exhibited alongside some contemporary art. Almost every frontage was to die for… This one was a wee bit more overgrown than the rest, but I loved it! Always great to catch sight of a 2CV! And finally, in the centre of the village, just next to the church is the building used as the shopfront in the film Chocolat. No one lives there now, although at the time of filming, it was a residential property. According to the village information guide, there was a pretty poor reaction to the film, critically and not many folk care about this aspect of the village! The church was also used in the film – both the outside and the interior. The interior is pretty unusual, with some quite amazing ancient murals which have been partially restored. The stalls are also quite captivating, with each stall being guarded by an intricate carving of various figurines. I’m so glad the rain dried up and the sun came out as we wandered through this wee village. With my Alchemical Chocolate™ Practitioners Training waiting for me back at home, this was a very welcome connection with the magic of Chocolat!