I am loving on this 5 year old artist 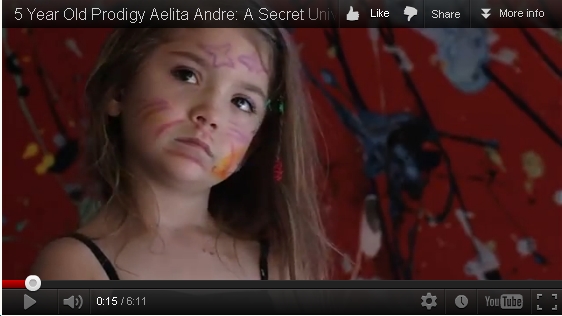 I’ve watched this video repeatedly last week.  I was mesmerised.

The film was doing a great job of infusing me the sorts of feelings I responded most positively to.

I wasn’t considering how great the art was.  I was moved by this wee girl’s commitment. Her resolve to create art.

I showed it to Martin (the hubster) this morning and he commented that the wee girl was so obviously into it. That she could see something we couldn’t. And that’s what made her an artist.

Maybe he’s right. Maybe she does tap into something we don’t see.

But you know what’s good enough for me? She’s an artist because she makes art. She shows up and she commits to putting down paint on canvas. Simple.

Creativity requires activity…And most of us hate to do something when we can obsess about something else instead. ― Julia Cameron

I heard a snippet on the BBC Breakfast show yesterday that only fifteen per cent of people in Britain achieve their childhood dreams.

Perhaps they’re too busy obsessing about other things instead?

What are you obsessing about today?